Savvy Saturday: An Interview with Meg West, Author of Love on Lido Key

Meg West is author of the soon-to-be released Love on Lido Key, a romantic comedy that leads up to a spectacular Fourth of July celebration. Today we talk to Meg about love, death, and some of the other unexpected fireworks found in her novel and in ordinary life.

Tell us a little bit about Love on Lido Key.

Lido Key begins with a young widow, Janie Alexander, fulfilling her promise to her late husband to watch the sunset every night on the beach. It leads to a chance encounter with a man who's just the opposite of her first love. Nick Costas is unreserved, openhearted, and the only son in a large, loud, and quarrelsome Greek family. One of the themes of the novel is that you never know what kind of curveballs life will throw at you--so this initial chance encounter is followed by a number of other coincidental meetings and accidents that bring Janie and Nick together but also threaten to keep them apart.

Love on Lido Key has a large cast of supporting characters that act as obstacles to Janie and Nick's happiness. Tell us a little bit about their role in the novel and how you integrated them into the plot.

Although Love on Lido Key deals with a tragic situation--a young woman who ends up widowed at age twenty-seven--it's essentially a romantic comedy. Literary critic Northrup Frye defines the pattern of comedy as follows:

a. a young man wants a young woman

b. his desire is thwarted by opposition (usually paternal)

c. through a twist in the plot, the hero secures his love

d. a new society is formed around the hero and heroine, which is celebrated in a festive ritual (usually a wedding)

In Love on Lido Key, the heroine and the hero's desire to get together is thwarted by the uptight parents of Janie's first husband, Peg-n-Ed Alexander, who live upstairs from her and who insist on having stodgy dinner parties with her every Thursday. On the opposite side, Nick's grouchy old father and fearsome trio of real-estate mogul sisters want him to marry a Greek girl--specifically, his old girlfriend Daphne. All of the opposing characters do their best to stand in the way of Janie and Nick's happiness. The novel ends not with a wedding, but a Fourth of July dinner cruise on a boat full of Bingo-crazy senior citizens.

Why did you choose to set the novel during the weeks leading up to Fourth of July?

Janie meets Nick as she approaches the first anniversary of her husband's death on July 3. I included the death scene in the novel because I wanted to show how shocking and traumatic it would be for a young woman to lose her husband as the rest of the world blithely celebrated Independence Day with barbecues, beach picnics, and sparklers. I ended the novel on the Fourth of July to show how far Janie had come in one year, and to bookend the story with a natural display of beauty--the sunset--and a manmade display, fireworks over the Gulf of Mexico.

Did you have an ideal reader in mind when you wrote this novel?

Yes! She--and he--are readers who love to experience the up-and-down seesaw motion of everyday life--in which we laugh one minute and cry the next. I hope readers will get a kick out of watching Janie and Nick fight off their respective families as they work their way toward happiness, and that they will be touched by the emotional trials of finding love so soon after tragic loss.

Love on Lido Key is the second in your trilogy of novels set on the barrier islands off Sarasota. Tell us about the first and third books.

This trilogy is loosely linked by place and doesn't have recurring characters, so the novels can be read in any order. Love on Longboat Key, published in 2017, is a heartwarming romance about a young woman who dreads spending Christmas in Florida with her cranky elderly parents. Yet that changes when she arrives at Sun Tower and meets the eligible bachelor whose equally quarrelsome parents have just moved into the penthouse. Love on the Links, forthcoming from Champagne Books, is a comic novel about a young woman who is forced to learn golf in order to be accepted by her future in-laws--but who comes dangerously close to losing everything when she falls for her handsome golf pro instructor. Although the novels are billed as beach reads, I also want to pitch them as great "snow reads," as they give readers a chance to travel to Florida and experience love and sunshine even in the dead of winter. 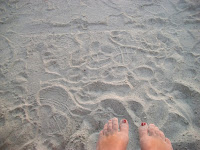 Meg West lives on the west coast of Florida with her husband and their two golden retrievers. Visit her website www.megwestnovelist.com and follow her on Twitter @megwestnovelist.

Love on Lido Key is available for preorder on Kobo and at the Champagne Bookstore!

Posted by Kylee Howells at 9:00 AM