FROM THE DESK OF
DONA PENZA TATTLE, ESQ.
AND
ASSOCIATE WRYE BALDERDASH

"Are you ready?" Tattle inquires as she enters the office, preening prettily in her Easter finery.

"For the Easter Champagne Books Hunt?" Wrye grabs his cane and top hat.

"Better than a hunt for eggs."

The dashing duo immediately dive into their Love of Literature Leap."


Immediately after arriving, Tattle fans herself with her bonnet. "Why is it so hot?"

Wrye loosens his ascot. "We're in the deep south, y'all, home to SEX, DEAD DOGS AND ME by Ed Williams.

"Oh my he is a rascal, for shure! So are his book, I laughed so hard, I looked happier than a flea square dancing on a pudgy dog." Takes Wrye's arm and does a twirl for emphasis.

"And this book is a true characterization of his younger years, in the sixties, fictionalized."

"Maybe...with Williams it could all be the truth so help me thirty-minute grits," Wrye says, plucking an colorful egg out of his pocket, peeling it, and then devouring.

Tattle delicately pinches her nose. "It appears he had little too much chili."

She peers through fingers. "Oh my! He's golfing with his barn door open."

"Yup, lost a bet and had to play a round with much exposed!"

"Try this," Wrye points out the chapter where he cheats on his girlfriend just to watch a special show on the gal's large-screened TV. "He's a trippin' down ole memory lane."

"And he is fast becoming a scholar, compares himself to Einstein." Preferring chocolate eggs, Tattle indulges before adding, "He sought the Brotherhood's guidance on whether or not he should focus on more than just sex, and brilliantly deduced, he should, to quote, 'Sin and learn.'"

"When it comes to humor, this book is all over it like flies on sh**!"

Disclaimer: Our southern accent is not real, but we think our drawl is finer than frog's hair. You can hear it, can't you?


The two appear next to a fence and two of the main characters from the romantic comedy Love Life And Other Disasters by Bernadine Darcy. "Oh my, see those sparks," announces Tattle, stroking a stuffed long-eared bunny, "and it's not from Shawn's hammer hitting nails as she repairs that fence."

"There is something quite alluring about a woman in tight jeans and a tool belt," declares Wrye.

Tattle moves around the characters, just a tad away from Bryan, a cool hottie that has captured the heroine's interest. "You have just paraphrased what Bryan has said about Shawn. Me thinks that he's is a bit more attracted to her than she realizes."

Wrye adjusts his yellow rose boutonnière and says, "Probably why he bailed her out of jail. Tsk, tsk, on our little miss getting herself arrested."

"Shawn is no little miss, my friend, she's has a don't-mess-with-me personality and she can out man any macho maniac this side of a sizzling romance. Besides, getting arrested was worth taking a baseball bat to her ex-fiancé's brand new Mustang."

"Ah, the one who left her at the altar before disappearing for two years."

"And the reason her high school sweetheart, Adam, was forced to arrest her."

"Which brings us back to Bryan...who she thinks treats her too much like a little sister, and considering she already has three assertive older brothers, she doesn't need another one."

"What she needs," holds up a hand as she rephrases. "What she wants, plain and simply is Bryan!"

"The question is will she get him, especially after he overheard her and Adam discussing their special night together?"

"Ooooh, this is certainly a must read."

Can't wait to dig into next month's fabulous books, CLOSURE by Rie McGaha, CHANCE'S GAME by Eve Langlais and LISTEN TO YOUR HEART by Cindy K. Green.

Until next time, keep reading!

Created and written by
Angelica Hart and Zi 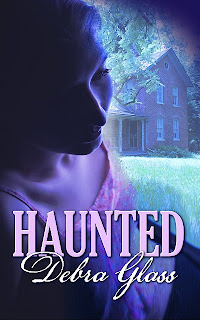 "You feel as if you are the person involved in the story and it really makes you empathize with Wren’s problems and her unlikely romance." ~ 5 Books ~ Long and Short Reviews 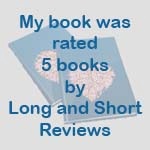 
My hopes of having a normal life died when I did. Especially since my near death experience turned me into a clairvoyant with a disfiguring scar. Not exactly most-popular material.
Now, because of me, my whole family has been forced to move to some small town in Tennessee. My parents think a quiet new school and a new set of friends will heal me of the scars I carry both inside and out.
There’s just one problem. I’m being haunted by Jeremiah Ransom, the charming ghost of a Civil War soldier who lived and died in my house. His presence makes me feel perfect. As if there’d never been a wound in the first place.
But I’m afraid that loving him will result in my death all over again.
Buy it now!
Amazon | Bookstrand | Champagne Books | ARE
Posted by Debra Glass at 8:45 AM 1 comment: