Lexie slapped the dash of the Tahoe. “You’ve been silent the whole trip. You are going to tell me your problem before I get out of this car.”

Todd grimaced. “I know you’re pissed at me, Lexie, but it’s not right to dump my worries on you.”

He jerked when she stabbed his arm with a finger. “I’m going to sit here until you fess up. If I’m late to see Colonel Travers, it will be all your fault and I will never forgive you.”

He rubbed the sore spot. “Lexie, it’s personal and none of your business.”

He cringed when she sent him a hurt-filled look and whimpered. She bowed her head and covered her face with her hands. “I can’t leave you like this, but I’ll be in so much trouble.”

Todd knew he wouldn’t be able to withstand her tears. He would crumble and they both knew it.

She popped up impatient to hear the story. “Hurry, I don’t have all day.”

“It’s Ely. There’s something going on with him. He’s behaving strangely. Way too nice.”

She shook her head. “I’m not seeing it. He fixed a great breakfast. He’s making Christmas plans. Nothing unusual there.”

“I know differently. We’ve been together too long for me not to notice the signs. He said he was going to the restaurant yesterday, but he lied. I checked the GPS on his phone and he was miles away. I could narrow him down to the post but couldn’t get any closer. He was moving around.”

“What do you suspect?”

“I’m afraid he’s found someone else. He’s tired of me and is being nice to let me down easy.” His voice broke. “I love him so much, I don’t know what I’ll do if he leaves me.”

She threw her arms around him and kissed his cheek. “I love him too. Enough to know that he would never leave us. Don’t worry. I have to go now, but we’ll discover the real story soon. Love you.”

She jumped out of the Tahoe, waved as Todd pulled away, and then turned and ran straight into Colonel Cochrane’s chest. As she rubbed her sore nose, Lexie knew she was screwed. 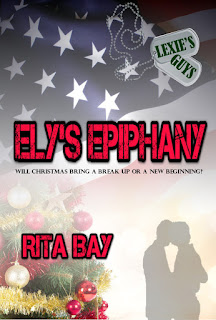 About the Author
Rita Bay has worked as a Registered Nurse, educator and school system administrator. While juggling family and work, she has participated in archaeological digs, earned a black belt in Shotokan karate, prospected for gold and crystals, and camped across Europe. She lives on the Gulf Coast, except when she's in Atlanta, at least for now.